“Pneumococcus is the most common cause of bloodstream infections, pneumonia, meningitis, and middle ear infections in young children.” – CDC, 2013

Pneumococcus can cause types of infections:

Pneumonia – an infection of the lungs that is a common bacterial complication of influenza and measles. The case-fatality rate is 5%–7% and may be much higher among elderly persons. Complications of pneumococcal pneumonia include empyema (i.e., infection of the pleural space), pericarditis (inflammation of the sac surrounding the heart), and endobronchial obstruction, with atelectasis and lung abscess formation.
Ear infections
Sinus infections
Bacteremia – blood stream infection
Meningitis – the inflammation of the protective membranes covering the brain and spinal cord 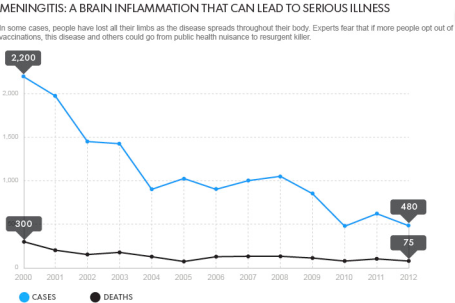 “The major types of pneumococcal disease are pneumonia (lung infection), bacteremia (blood infection), and meningitis (infection of the covering of the brain and spinal cord). Less severe clinical diseases include ear and sinus infections.” – CDC, 2013

“In the United States, about 90% of invasive pneumococcal disease cases are in adults.” – CDC, 2013

“There are more than 90 types of pneumococcal bacteria. PCV13 protects against 13 of them. These 13 strains cause most severe infections in children and about half of infections in adults.” – CDC, 2014

“Pneumococcal disease is caused by Streptococcus pneumoniae bacteria. Pneumococcal polysaccharide vaccine (PPSV) protects against 23 types of pneumococcal bacteria, including those most likely to cause serious disease..” – CDC, 2014

“The committee concluded the evidence convincingly supports 14 specific vaccine–adverse event relationships. In all but one of these relationships, the conclusion was based on strong mechanistic evidence with the epidemiologic evidence rated as either limited confidence or insufficient.” Of these “14 specific vaccine-adverse event relationships,” 1 of them are from the Meningococcal vaccine.  The symptom that have been confirmed to be convincingly supportive of causal is “Anaphylaxis.” – Committee to Review Adverse Effects of Vaccines; Institute of Medicine, TABLE S-2 – Summary of Causality Conclusions, 2011 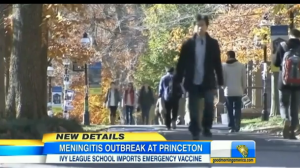 In 2013, Princeton University suffered a serogroup B meningococcal outbreak that was “so serious in fact, the CDC is taking the unprecedented move of importing emergency doses of Bexsero, a meningitis vaccine not yet approved for use in this country” according ABC News’ Good Morning America. As stated in the story, this sets an extraordinary precedent to inoculate people during an emergency before our FDA has had a chance to approve its safety.

“As many as 13,000 people received steroid shots suspected in a national meningitis outbreak, health officials said Monday… Officials don’t know how many of the shots may have been contaminated with meningitis-causing fungus.” – USA Today, 2012 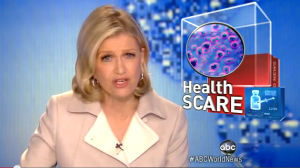 ABC News does early reporting of the manufacturer of the vaccine, New England Compound Center, and health concerns of the outbreak.

In response to these two outbreaks, the FDA and Pfizer saw a tremendous opportunity so they “accelerated the approval of Trumenba, completing the approval process in “well under six months,” the typical time frame for completing even a priority review of a new drug.” – The Washington Post, 2014