The Virus and It’s Effect

“There are more than 100 types of HPV, of which at least 13 are cancer-causing (also known as high risk type). Two HPV types (16 and 18) cause 70% of cervical cancers and precancerous cervical lesions.” – World Health Organization, 2013

“In sum, our data indicate that newly formed carcinoma-specific karyotypes generate and maintain carcinomas, independent of latent viral sequences or mutations of tumor suppressor genes. Based on our findings it is expected that a vaccine against human papilloma viruses will have no effect on the occurrence of cervical carcinomas.” – Molecular Cytogenetics, 2013

The Pharmaceutical Industry’s big push is to have prepubescent females (and males) vaccinated against HPV to prevent cervical cancer. However, these children are not even at the stage in their life that cervical cancer is a high threat. People who demonstrate the following risk factors according to National Cancer Institute, 2014 are those at exceedingly higher risk of cervical cancer:

“Two HPV vaccines available (Gardasil® and Cervarix®) which protect against the types of HPV infection that cause most cervical cancers (HPV types 16 and 18). Both vaccines should be given as a three-shot series.” – CDC, 2014

These two vaccines allegedly prevent HPV, which may cause cancer when you have increased risk factors. When performing the risk vs. reward assessment of  whether to take a vaccine, the positive outcomes must far out weigh any potential down side. So, what dangers and adverse effects do the HPV vaccines themselves pose?

Baring in mind always, the Vaccine Adverse Event Reporting System (VAERS) is completely voluntary and the majority of cases that occur will never go reported. The below side effects have become horrific nightmares to hundreds of families in America and England.

Of the 32 reported deaths “14 of the deceased had only received the HPV vaccine, while others had received multiple vaccines. The average age of the girls who died was 18, and causes of death varied widely — including two cases of diabetic ketoacidosis, one case related to prescription drug abuse, one case of juvenile amyotrophic lateral sclerosis or Lou Gehrig’s disease, one case of meningoencephalitis, three pulmonary embolisms or blood clots to the lung, six cardiac-related deaths, one case of sepsis related to influenza B and two because of seizure disorders. Four deaths were unexplained.” – The New York Times, 2009

“We documented here the evidence of the potential of the HPV vaccine to trigger a life-disabling autoimmune condition. The increasing number of similar reports of post HPV vaccine-linked autoimmunity and the uncertainty of long-term clinical benefits of HPV vaccination are a matter of public health that warrants further rigorous inquiry.” – American Journal of Reproductive Immunology via PubMed, 2013 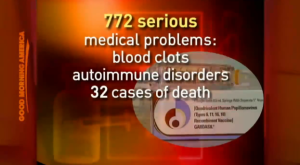 Three doctors on ABC’s Good Morning America, 2009 admit they don’t know enough about the vaccine and whether or not it is even safe. Further, one of the doctor’s confesses that he will not be giving it to his 11 year old daughter.

CNN, 2009 reported that “Two months after getting the shot, Taqueria says she got a rash on her face and arms, leaving these scars. She had swelling all over; pain in her joints and poor circulation in her fingertips. Her doctor told us she now suffers from an auto-immune disease, and says it is possible that Gardasil triggered her illness. Though she made it clear, the cause could not be proven.”

There are countless numbers of personal testimonials of young women being permanently damaged by Gardasil all over Youtube. Additionally, at the time of this CBS, 2009 report, there had been 5,021 Emergency Room visits because of Gardasil, and if the damage isn’t bad enough, the manufacturers and the CDC are now beginning to recommend this vaccine for boys.

In England, Ceravix vaccine had similar adverse reactions. Of the 1,340 reports, among them, “There were several cases of paralysis. One had Bell’s palsy, which paralyzes the face; one had hemiparesis, which paralyzes or severely weakens half the body; two experienced hypoesthesia, in which the sufferer loses much of her sense of touch, and one had Guillain-Barré syndrome, which paralyses the legs” and “four girls had convulsions, one had a seizure and one had an epileptic fit.” – The UK Daily Mail, 2009

“Medicines and Healthcare Products Regulatory Agency had 8,228 adverse reaction reports in 10 years – only estimated 10 per cent of real tally” – The UK Daily Mail, 2015