The vaccine industry is worldwide with significant profit margins. It’s no wonder then that when an already manufactured, researched and designed, patented vaccine comes up for approval on efficacy and safety, the manufacturer wants it fast-tracked and promoted as life saving by the government. What better way to do that than have your former employee take over a valuable new role at the CDC. Or vice-versa, reward a former high ranking CDC employee, who comes with the full knowledge and connections of the CDC, with a high ranking position at your manufacturing company. That is exactly what’s at play in the vaccine industry. It’s business as usual merging big government with big business.

Former CDC director from 2002 – 2009
She will be in charge of Merck’s Global Vaccine Business, which is worth $5 billion.

Dr. Sam Katz, CDC advisory committee chair, was a paid consultant for most of the major vaccine makers and shares a patent on a measles vaccine with Merck. – Robert F. Kennedy Jr., Salon.com, 2011 & Rolling Stone, 2011

Professor Anne Kelso, one of the board members of WHO (World Health Organization), has disclosed that she has a “shareholding (significant) of the company CSL Limited;” yet, WHO has allowed her to remain on the board. 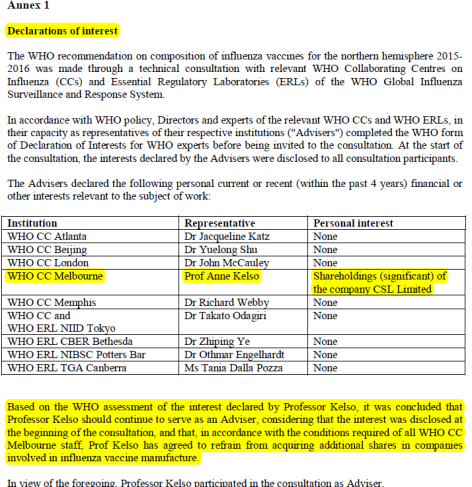 Dr. Paul Offit is famous for saying, a “healthy infant could safely get up to 10,000 vaccines at once” makes a fortune off of defending vaccines. – Huffington Post, 2011

He was a consultant for Merck, holding a $1.5 million dollar at Children’s Hospital funded by Merck. – CBS News, 2008

Dr. Offit is the patent holder of the Rotavirus vaccine, Rotateq, which sold for $182 million. – CBS News, 2008 How much of that money was his cut is unknown.

He is affiliated with several industry-funded organizations like Parent of Kids with Infectious Diseases (PKIDs) and Every Child by Two (ECBT).

“In this country we just don’t think it’s your inalienable right to catch and transmit a potentially fatal infection and so we at least put that one hoop you have to jump through which is mandatory vaccination.” Dr. Paul Offit – BBC News, 2013

“The CDC Foundation has received three grants totaling $13.5 million from the Bill & Melinda Gates Foundation…The grants will enable the National Center for Immunization and Respiratory Diseases of the U.S. Centers for Disease Control and Prevention (CDC) to work in collaboration with partners to advance the implementation of meningitis and rotavirus vaccines, ensuring global disease protection.” – CDC Foundation, 2013

“The CDC is refusing to answer Channel 2 Action News’ questions about a high-ranking employee who served on the board of a now-defunct nonprofit that’s been the subject of a series of scandals…Within a few years, her nonprofit was also done, and gone was the more than $3 million in federal grants it had gotten from the CDC here in Atlanta.” – ABC – WSB-TV Atlanta, 2015

According to the United State Attorney’s Office, 2011, “ATLANTA, GA –  POUL THORSEN, 49, of Denmark, has been indicted by a federal grand jury on charges of wire fraud and money laundering based on a scheme to steal grant money the CDC had awarded to governmental agencies in Denmark for autism research.”  The amount Thorsen stole exceeds $1 million. Facing up to 260 years in prison and $22.5 million in fines, as of now, 3 years later, Throsen still remains free for now.

“China has fined the British pharmaceuticals giant GlaxoSmithKline (GSK) $488.8 million (3 billion Yuan) for a “massive bribery network” to get doctors and hospitals to use its products…The police said it is believed Reilly authorized his salespeople to pay doctors, hospital officials and health institutions to use GSK’s products since 2009.” – ABC News, 2014

The Vaccine Court has awarded nearly $2 billion dollars for vaccine-injury claims in nearly 2,500 cases since 1989. – Reuters, 2011

The Money in Vaccines

The vaccine industry give millions to the Academy of Pediatrics; the true numbers are kept secret, but bits and pieces reveal the following. These direct contributions could be looked at like bribes, and they work in much the same way various lobbing groups sponsor a politicians campaign. They don’t give away money because it’s charitable; they do it for something in return. 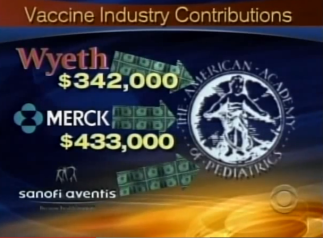 CBS reporter, Sharyl Attkisson, discusses the conflicts of interest in the vaccine industry in a CBS News report.

There is nothing wrong with private companies earning large profits for products people are willing to pay for by their own free will. However, big pharma and our federal government fear monger and use color-of-law tactics, that dupe people into believing that it is against the law to refuse vaccination. No better example is there than the CDC’s recommended vaccine schedule for children 6 and under. People actually believe that they must give their kids all the shots in order to attend school. This is not the case, and for more on your particular states exemptions visit Vaccines and the Human Response.

The conflicts of interest that are prevalent among influenza experts “is not at all surprising to me,” says Dr. John Bartlett, founding director of the Center for Civilian Biodefense Strategies at Johns Hopkins Unviersity, “since the people in medicine who know most about flu are often conflicted because they also are advisors to pharma and often do the big trials that are funded by pharma.” – ABC News, 2010

Below are a couple of examples that illustrate the size and scope of the vaccine market. The current world vaccine market is around $33 Billion a year and predicted to grow at a rate of more than 5 times The World Banks‘ calculated global growth rate of 2.6%.

Flu vaccines report an annual of $7 billion in the industry in 2009. – The Wall Street Journal, 2009 That’s just one vaccine.

The Rotarix Vaccine (one of two Rotavirus vaccines) has “an estimated 69 million doses of the vaccine have been administered globally. Worldwide sales of the vaccine in 2009 were $425 million, the company said, with $115 million in the U.S.” – Los Angeles Times, 2010

Dr. Wolfgang Wodarg, chairman of the Parliamentary Assembly of the Council of Europe Health Committee, spoke in a parliamentary hearing about “The handling of the H1N1 pandemic: more transparency needed?”, 2010. In his speech, he explained how the H1N1 pandemic of ’08-’09 was purposefully over blown for the purpose of profit.

“It is only this change [the new definition of “pandemic”] that made it possible to transform a relatively mild flu into a worldwide pandemic, to implement relevant plans, which allowed pharmaceutical companies to transform their contracts with many governments all over the world into cash. Therefore millions of people were vaccinated for no good reason, and children were vaccinated whereas it was not even clear, if the vaccine had a positive effect on them because this was never clinically tested and proven.”

When NY Times, 2004, reported on a new vaccine for bacterial meningitis, they were reported as stating the following:

“The price of the new vaccine will most likely be $80 a dose. Vaccinating all 40 million people from age 11 to 20, as some experts have suggested, would cost the government $3.5 billion next year…’We don’t have a good track record immunizing adolescents,’ said Dr. Lance Rodewald, director of the immunization services division of the National Immunization Program at the disease centers. Frightening parents about the consequences of failing to vaccinate their children will most likely be part of the campaign. For that task, meningococcal meningitis is ideal.”

The retailers that administer the shots and boast about the vaccines availability in their store through advertisement make a considerable percentage too.

Walgreens administered 5.5 million flu shots in 2012 placing it in 2nd behind the federal government. The flu vaccine retails for $30 at Walgreens. The profit margin is 100% for Walgreens; $15 manufacturer whole sale + $15 going to Walgreens according to CDC. – Triblive.com, 2012

VFC program sponsored by the CDC provides ‘free’ vaccines to eligible children who’s family may be having a hard affording them. It is a network of 61 grantees and 44,000 enrolled providers. In 2010, approx. 82 million VFC vaccine doses were administered to an estimated 40 million children at a cost of $3.6 billion. – HHS.gov, 2012