The Installment of Silence

“The distrust of wit is the beginning of tyranny.” ― Edward Abbey

In the wake of a massive ideological shift in America, what has been the response of the online goliaths of media? Have they confessed any intellectual impotences in their argument? Have the leftist outlets sought to open up dialogue, taking an honest approach to understanding the sentiments, positions, and reasons of more than half of the country who strongly disagree with their collectivist ideology?

The mainstream outlets and aggregators have begun to clear an old trail, a trail all too familiar to history’s long, dark suppression of ideas. They are instituting new-age, dimming policies in an effort to snuff out those who dare express an alternative perspective to their own.

The most damaging authoritarian implementation of this censorship comes from Facebook’s commitment to fight ‘fake news.’ Instead of

letting Facebook’s many users compete in the free market of ideas, Facebook has literally taken a play out of the Chinese-style, censorship playbook. Mark Zuckerberg  met with China’s chief propagandist in March of 2016, and today, Facebook has undergone assessments to determine ‘if the web sites that are the source of stories flagged by the community come from a legitimate media organization or a site that masquerades as one.’

You may recall the alternative media trounced the mainstream narratives in 2016 victoriously mounting meme battles, which delivered witty facts in a quick and impactful way. Likewise, many new voices in alternative media have built large, successful platforms that generate true journalism in the free market of ideas. Facebook has now made a public decree to disappear those whom disseminate news that contradicts Big Brother.

Even if you are concerned with untruths circulating the inter-webs, in a free society, we should expose the worst ideas to the most amount of sunlight. In this way, these ideas crumble where all can see; thus, these bad ideas or complete falsehoods are blocked from traveling underground only to resurface later in horrifying ways.

Perhaps no media outlet is suffering a bigger defeat in 2016 than Vice. Vice’s platform is one that attempts to mesh truly eye opening journalism from across the globe with trendy, counter-culture taboos, like indulging in weed and pornography as a life-style choice. 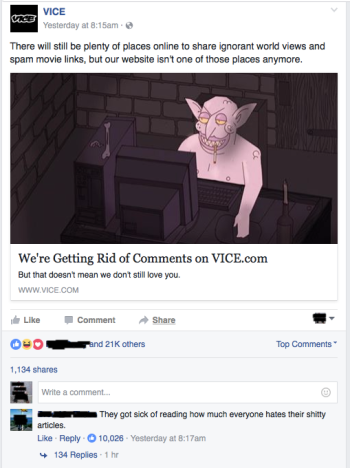 Since one side of Vice’s dual mission has delivered mega truth bombs on a wide variety of current events for a couple of decades now, they have, in turn, generated a more savvy millennial subscriber who seeks hard fought journalistic content not produced by the other mainstream media outlets. These subscribers are often very engaged in deconstructing mainstream narratives. But there in lies the problem for Vice. With a more intelligent subscriber base, Vice’s audience have a greater bullshit detector and a more vocalized voice in which to express it than those of other mainstream media outlets.

Vice is suffering brand destabilizing damages in their comment’s section on their website. Just gaze upon one such example found on their Facebook page. It’s more common than not to find that the top trending comments are engagingly critical of the article’s position. So much so in fact, the top comments often collectively have a larger number of ‘likes’ than the article itself. Vice may not be able to disable the comments section on Facebook, but that hasn’t stopped them from silencing feedback and ideas on their own site. They have publicly declared the end of their own comments section on their website. This is a strong admission that they have lost the intellectual debate, and they know it. 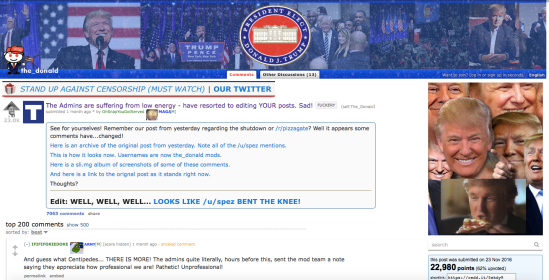 Even news aggregator giant, Reddit, has taken the low road of deceit since the election of Donald Trump. Last month, Reddit CEO, Steve Huffman, reluctantly confessed his  personal attempt of censorship. Huffman altered members of “The_Donald” subreddit’s posts ‘without their knowledge or consent’.

“As the CEO, I shouldn’t play such games, and it’s all fixed now. Our community team is pretty pissed at me, so I most assuredly won’t do this again,” Huffman wrote.

Though Reddit does disavow this failed, covert act of censorship, they do not disavow censorship itself. Instead, they have doubled down, taking on a more overt style of squashing dissent. In a followup article, Business Insider describes Reddit as ‘now taking a more hands-on approach in monitoring the tone of the site and disciplining users who are out of line — even if they don’t merit being kicked off the site entirely. They can now also warn users for bad behaviour, or give them “timeouts,” as well as permanent bans.’

The giant players in charge of the facilitation of free debate in the modern day town square  of the internet have resigned from this role, and instead, they have assumed the role of guillotine operator of ideas. As the establishment media continues forward finding themselves on the losing side of the debate, we will witness much more chilling acts of censorship, silencing any popular and enlightened, opposing view.