Humor is an incredibly powerful persuasion technique. That’s common sense. We’re influenced by those we like, and humor makes us feel good.  But when it’s utilized to frame otherwise perceived humorless and uninteresting topics, such as politics, to a benighted audience, one can easily be lulled into a passive adherent.

A vast majority of millennials will boastfully admit their distaste and disinterest for politics like that of an attitude towards the latest Nickelback single (I know, I know, too easy). Yet, a very loud minority think of themselves as true intellectuals. And, when set against their peers, it’s easy to see why. But they forgot, or were never truly taught, that the key to knowledge is being able to think independently.

Like that of Aristotle succeeding his predecessors of Plato and Socrates, John Oliver has a true advantage of standing on the shoulders of giants before him, namely, Stephen Colbert and Jon Stewart. For a decade and a half, nearly the entire formative years of millennials, these comedians have been satirizing an otherwise treacherous, political landscape to an audience who, under any other condition, would be retreating to a ‘safe space.’ 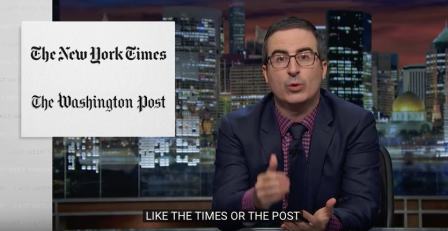 The Season Finale of Last Week Tonight with John Oliver aired this past Sunday, 11/13/2016. Starting at 20:30, John said, “He [Donald Trump] is a man who would kick you in the nuts and then tell you that your penis did it. So the press is going to face challenges…You need to support actual journalism by buying a subscription to outlets like the Times or the Post or your local newspaper.”

John Oliver made a clear pitch to millennials to buy newspaper subscriptions. He did so by setting the purchase of the newspapers as a weapon against the great enemy of his show for the past year, one who his audience would do nearly anything to stop, Donald Trump. Simple, subtle, framing and pitch, but what was the impact? As pointed out in a previous post, the New York Times 3rd quarter revenue has fallen 95.7%. This is in large part due to its fallacious coverage of then candidate, Donald Trump. So the New York Times is in desparate need of a resurgence.

Well, the New York Times on 11/17/2016 was proud to announce that “…the seven-day period since Election Day, it had a net increase of 41,000 paid subscriptions to its news products, both print and digital…” That is to say, for half of the week outlined above by the New York Times, John Oliver’s message has been driving millennials to fund the Times. Now, this is not the sole driver of the increase in subscriptions, the election itself drove traffic to all media outlets over the past week. But, Oliver’s influence over the self-described intellectuals on the left cannot be overstated. Utilizing his humor, he has an ability to persuade them to action.

John Oliver’s format is the tip of the spear for the left in the new media landscape. The old newspaper chains are losing in the free market. Their subscriptions are way down. But the power of Oliver’s humor is now being concentrated to rescue the fallen media outlets in battle.  For those of us in the information war battling on the front lines, fix your sights on John Oliver (figuratively speaking 😉 ).