Measles – The Virus and It’s Effect

“Measles is a highly contagious respiratory disease caused by the measles virus. The disease is also called rubeola. Measles causes fever, runny nose, cough and a rash all over the body. About one out of 10 children with measles also gets an ear infection, and up to one out of 20 gets pneumonia. For every 1,000 children who get measles, one or two will die.” – CDC, 2014

Less than 1 death per year

You might be thinking to yourself, yeah, there is only one death per year because of the incredible work of the vaccine in reducing the incidence of contracting the measles. A logical thought until you understand the bigger picture of the history of the virus and the vaccine during the 20th century. “A killed measles virus (KMV) vaccine came into use in the United States in 1963. What you may not have heard, is that by 1963, the death rate from measles in the United States had already dropped by approximately 98%.” – International Medical Council on Vaccination, 2014

“Today there are only about 60 cases a year reported in the United States, and most of these originate outside the country.” – CDC, 2014

So, since there are usually 60 cases a year for people of all ages who catch the virus, and only 2 out of every 1,000 people who get the measles will die from it, the odds that an infant will die from it in an average year are near 0. Below, is a chart showing the incidences for the last decade or so. Given the infinitesimally small chance of contracting the disease and especially dying from it, is there really a need to vaccinate against it? 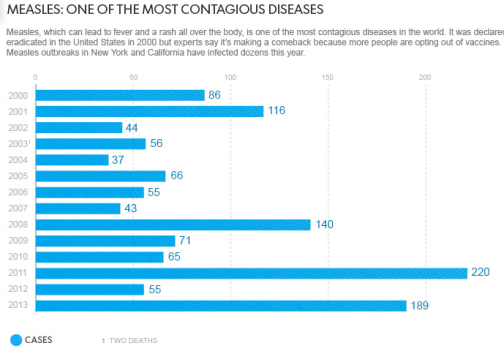 Above is the bar graph of Measles incidences of which only 2 were fatal over the last decade in the U.S. – USA Today, 2014

Below are medical and scientific journal’s documented adverse events associated with the MMR or MMRV (measles-mumps-rubella-varicella) vaccines.

“All measles-containing vaccines are associated with several types of adverse events, including seizure, fever, and immune thrombocytopenia purpura (ITP).” –  American Academy of Pediatrics, 2014

Immune Thrombocytopenic Purpura (ITP) – a clinical syndrome in which a decreased number of circulating platelets (thrombocytopenia) manifests as a bleeding tendency, easy bruising (purpura), or extravasation of blood from capillaries into skin and mucous membranes (petechiae) – Medscape, 2015

“We found evidence that some vaccines are associated with serious AEs (Adverse Events); however, these events are extremely rare and must be weighed against the protective benefits that vaccines provide….Strength of evidence was high for measles/mumps/rubella (MMR) vaccine and febrile seizures; the varicella vaccine was associated with complications in immunodeficient individuals. ” –  American Academy of Pediatrics, 2014

“Reporting in the journal Nature Genetics, the team found that febrile seizures occurred in roughly one in every 1,000 children who were given the MMR vaccine.” – Yahoo News, 2014

According to the Journal of Pediatrics, “Among the children who never had measles infection, those who had been vaccinated were more likely to have nasal allergies, Rosenlund’s group observed.” – Reuters, 2009

“Among 12- to 23-month-olds who received their first dose of measles-containing vaccine, fever and seizure were elevated 7 to 10 days after vaccination. Vaccination with MMRV results in 1 additional febrile seizure for every 2300 doses given instead of separate MMR + varicella vaccines. Providers who recommend MMRV should communicate to parents that it increases the risk of fever and seizure over that already associated with measles-containing vaccines.” –  American Academy of Pediatrics, 2010

“A rogue strain of the measles, mumps and rubella vaccine caused deafness in children, the Government has admitted. Katie Stephen, 21, who lost the use of her left ear days after being inoculated, is the first known victim to prove her case to the Vaccine Damage Payments Unit.” The Times of London, 2012

“The committee concluded the evidence convincingly supports 14 specific vaccine–adverse event relationships. In all but one of these relationships, the conclusion was based on strong mechanistic evidence with the epidemiologic evidence rated as either limited confidence or insufficient.” Of these “14 specific vaccine-adverse event relationships,” 3 of them are from the MMR.  The symptoms that have been confirmed to be convincingly supportive of causal are “Measles Inclusion Body Encephalitis, Anaphylaxis, or Febrile Seizures.” – Committee to Review Adverse Effects of Vaccines; Institute of Medicine, TABLE S-2 – Summary of Causality Conclusions, 2011

“This clustering suggests that a causal relationship between measles vaccine and encephalopathy may exist as a rare complication of measles immunization…A total of 48 children, ages 10 to 49 months, met the inclusion criteria after receiving measles vaccine, alone or in combination. Eight children died, and the remainder had mental regression and retardation, chronic seizures, motor and sensory deficits, and movement disorders.” – Pediatrics, 1998

“Children of mothers vaccinated against measles and, possibly, rubella have lower concentrations of maternal antibodies and lose protection by maternal antibodies at an earlier age than children of mothers in communities that oppose vaccination. This increases the risk of disease transmission in highly vaccinated populations.” – The Journal of Infectious Diseases Study, 2012

The following are documented Adverse Reactions that Merck & Co. Inc. admit are associated with their MMR vaccine in their vaccine package insert:

For more on the MMR and compelling evidence that it and other vaccines trigger autism, see this page, Autism and the Vaccine Trigger.

Outbreaks Occur in the Vaccinated Population

The MMR is so ineffective in eliminating the Measles that the U.S. adopted a 2nd dose strategy in 1989. Despite the 2nd dose, there are still large percentage measles outbreaks in the vaccinated populations.

“The apparent paradox is that as measles immunization rates rise to high levels in a population, measles becomes a disease of immunized persons. Because of the failure rate of the vaccine and the unique transmissibility of the measles virus the currently available measles vaccine, used in a single-dose strategy, is unlikely to completely eliminate measles.” – Journal of American Medical Association, 1994

“Children of mothers vaccinated against measles and, possibly, rubella have lower concentrations of maternal antibodies and lose protection by maternal antibodies at an earlier age than children of mothers in communities that oppose vaccination. This increases the risk of disease transmission in highly vaccinated populations.” – The Journal of Infectious Diseases, 2013

In fact, the measles virus has been proven to shed a few weeks after vaccination. This will allow others to contract the disease from a host that was recently vaccinated against the measles.

“In some cases, measles virus RNA was detected as early as 1 day or as late as 14 days after vaccination. Measles virus RNA was also detected in the urine samples from all four of the young adults between 1 and 13 days after vaccination. This assay will enable continued studies of the shedding and transmission of measles virus and, it is hoped, will provide a rapid means to identify measles infection, especially in mild or asymptomatic cases.” – Journal of Clinical Microbiology, 1995

“Excretion of small amounts of the live attenuated rubella virus from the nose or throat has occurred in the majority of susceptible individuals 7 to 28 days after vaccination.” – Merck & Co., Inc., 2014

The vaccine prevention strategy only works if it does in fact prevent those vaccinated from acquiring the disease. However, much like Whooping Cough and Chickenpox, the Measles has numerous outbreaks in populations documented to be majorly vaccinated. Each of the below incidences are different and stand alone cases; yet, they all have that one thing in common, vaccinated people got the disease too.

“A woman who became the first person to die of the measles in the U.S. in 12 years had been vaccinated against the disease, it has been revealed.” – UK Daily Mail, 2015

“We report here the case of a child presenting with fever 8 days after vaccination with a measles-mumps-rubella vaccine. Measles virus was isolated in a throat swab taken 4 days after fever onset. This virus was then further genetically characterised as a vaccine-type virus.” – Vaccine, 2002

“The Baltimore Health Department is investigating a possible measles case in a 12-month-old Baltimore resident…The symptoms started after the child received the vaccine.” – WBAL-TV 11, 2015

“That’s why a fully vaccinated 22-year-old theater employee in New York City who developed the measles in 2011 was released without hospitalization or quarantine. But like Typhoid Mary, this patient turned out to be unwittingly contagious. Ultimately, she transmitted the measles to four other people, according to a recent report in Clinical Infectious Diseases that tracked symptoms in the 88 people with whom “Measles Mary” interacted while she was sick.” – American Association for the Advancement of Science (AAAS), 2014

“An outbreak of measles occurred in a high school with a documented vaccination level of 98 per cent.” This outbreak occurred in Waltham, MA between March and April of 1984. – American Journal of Public Health, 1987

“From December 9, 1983, to January 13, 1984, 21 cases of measles occurred in Sangamon County, Illinois… The outbreak involved 16 high school students, all of whom had histories of measles vaccination after 15 months of age documented in their school health records.” – CDC, 1984

“From 1985 to 1988 there were a median of 47 outbreaks among school-age populations and only 8 outbreaks among preschool populations; 42% of the affected children had been appropriately vaccinated for measles.” – American Society for Microbiology, 1995

“An outbreak of measles occurred among adolescents in Corpus Christi, Texas, in the spring of 1985, even though vaccination requirements for school attendance had been thoroughly enforced…Fourteen of 74 seronegative students, all of whom had been vaccinated, contracted measles.” – The New England Journal of Medicine, 1987

“In early 1988 an outbreak of 84 measles cases occurred at a college in Colorado in which over 98 percent of students had documentation of adequate measles immunity (physician diagnosed measles, receipt of live measles vaccine on or after the first birthday, or serologic evidence of immunity) due to an immunization requirement in effect since 1986.” – American Journal of Public Health, 1991

“A measles outbreak occurred among a highly vaccinated population in Alaska during 1998…Of 33 confirmed case patients identified, 31 had been vaccinated with 1 dose of MCV (Measles Containing Vaccine), 1 had received 2 doses, and vaccination status was unknown in 1 case.” – The Journal of Infectious Diseases, 2004